The history of umbrellas: from its origins to the present day

The history of umbrellas: from its origins to the present day

Foldable umbrella, automatic umbrella, mini umbrella, large umbrella, wind resistant, always dry… There is something for everyone now! But what are the origins of this indispensable everyday accessory?

The origins of the umbrella

The umbrella has been around for almost 4000 years… first discovered in the historical Mesopotamia region in Western Asia. In those distant times, the sun was a more threatening enemy than the rain, which is why the mighty parasol emerged to protect against this threat.

These emergent umbrellas were first made of palm leaves, papyrus and peacock feathers and they were exclusively reserved for the upper class in ancient Egypt and the Mesopotamia region. Although, this product was so heavy it often required people to carry it. Parasols were also present in medieval China, where they were made out of bamboo sticks, and covered with leaves and feathers. 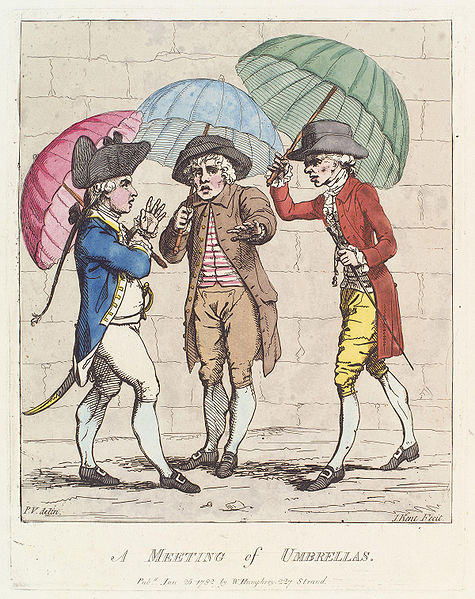 From parasols to umbrellas

In French, ‘parapluie’ means umbrella, with ‘para’ meaning protection. Whereas in English, umbrella has the latin stem ‘umbra’ meaning shadow so has a direct link to its predecessor, the parasol.

It was only by the 16th century that the umbrella as we know it became a reality. The decisive moment when oil and wax covers replaced the status quo covers on parasols. It is from this moment that the umbrella became an item to protect against bad weather and rain. From this point on, the parasol and the umbrella have separate destinies.

In the 17th century, the umbrella became a hit in Western countries, especially in stylish Italy, France and Britain. At first, it was only considered a feminine accessory to protect women from the rain, but English men progressively adopted it through the 18th century with Jonas Hanway leading the way for the era of umbrellas for men.

Umbrellas became more and more popular with the European higher-class society in the 18th century, it even became a fashion accessory during the period of the French revolution. Craftsmen focused their work on the handles, to make works of art through refining and sculpting canes from prestigious materials like ebony.

These materials were often pricey, so in the 19th century umbrellas became attention grabbing pieces. So many inventions came about to avoid theft of these treasures; integrated padlocks, sirens/alarms, even hidden weapons. The umbrella also became multifunctional in response to growing demands for personalisation, equipped with lights, watches, perfume storage and even smoking accessories and an array of other unexpected objects, (blog post about these coming soon!).

The first European umbrellas had a whalebone structure, and even though the materials used have evolved immensely, this same basic structure remains important. The whale bone structure was replaced by wood, steel, then aluminium and now fiberglass. The oil cloth canvas has also been replaced by more and more resistant types of nylon.

The telescopic (foldable) umbrella was only born in the 20th century, thanks to Hans Haupt in 1928. However, Jean Marius invented a compact, foldable umbrella in France in 1701, but it was not telescopic. It was only by 1969 that Bradford Philips obtained the first patent for his foldable umbrella invention. But the story doesn’t end there, materials continue to evolve for more resistance and comfort… which gives way to the development of new models: transparent umbrella, pocket-sized umbrella, inverted umbrellas, walking-stick umbrellas…the list goes on, as the umbrella has become both a practical object and an indispensable fashion accessory.

At Beau Nuage, our umbrellas are equipped with the latest technology. The Teflon coating allows rain drops to slide down the cover with no impact. And how could we forget the patented absorbent covers which accompany our umbrellas to always keep them dry in your bag! You can find an incredible choice of umbrellas and covers available on our website.

May the rain be with you!